Genius is when an idea and the execution of that idea are simultaneous.
--Albert Einstein

Design 13 Albert Einstein Quote: Genius Is When An Idea And The Execution Of That Idea Are Simultaneous.- Black Text On Quotes Background

Design 14 Albert Einstein Quote: Genius Is When An Idea And The Execution Of That Idea Are Simultaneous.- White Text On Starry Pic Background

Design 15 Albert Einstein Quote: Genius Is When An Idea And The Execution Of That Idea Are Simultaneous.Printed In White Text On Seashore Background

The moral code of Heaven for both men and women is complete chastity before marriage and full fidelity after marriage.

The moral certitude of the state in wartime is a kind of fundamentalism. And this dangerous messianic brand of religion, one where self-doubt is minimal, has come increasingly to color the modern world of Christianity, Judaism, and Islam.

The moral cement of all society is virtue; it unites and preserves, while vice separates and destroys.

The moral case for individual initiative in a free economy holds that people have a God-given right to use their creativity to produce things that improve our lives.

The moral case for gender equality is obvious. It should not need any explanation.

The moral backbone of literature is about that whole question of memory. To my mind it seems clear that those who have no memory have the much greater chance to lead happy lives.

The moral argument is that we give big business a huge tax break, and why do we do it? To get their jobs.

The moral angle to the foreclosure crisis -- and, of course, in capitalism we're not supposed to be concerned with the moral stuff, but let's mention it anyway -- shows a culture that is slowly giving in to a futuristic nightmare ideology of computerized greed and unchecked financial violence.

The moral and spiritual aspects of both personal and international relationships have a practical bearing which so-called practical men deny.

The moral and social aspiration proper to American life is, of course, the aspiration vaguely described by the word democratic; and the actual achievement of the American nation points towards an adequate and fruitful definition of the democratic ideal.

The moral and political principles that govern men are derived from three sources: revelation, natural law, and the artificial conventions of society. With regard to its main purpose, there is no comparison between the first and the others; but all three are alike in that they all lead towards happiness in this mortal life.

The moral and constitutional obligations of our representatives in Washington are to protect our liberty, not coddle the world, precipitating no-win wars, while bringing bankruptcy and economic turmoil to our people.

The moral ambivalence of the great mother goddesses has been conveniently forgotten by those American feminists who have resurrected them. We cannot grasp nature's bare blade without shedding our own blood. 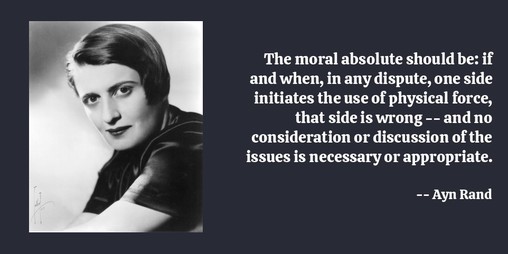 The moral absolute should be: if and when, in any dispute, one side initiates the use of physical force, that side is wrong -- and no consideration or discussion of the issues is necessary or appropriate.

The moral abhorrence of private prisons has been brought to our attention by courageous acts of investigative journalism, illuminating scholarship, and the work of activists who have decried the social stratification brought about by our prison systems.

The moral I draw is that the writer should seek his reward in the pleasure of his work and in release from the burden of thought; and, indifferent to aught else, care nothing for praise or censure, failure or success.

The moot point is, whether Leviathan can long endure so wide a chase, and so remorseless a havoc; whether he must not at last be exterminated from the waters, and the last whale, like the last man, smoke his last pipe, and then himself evaporate in the final puff.