If one tries to navigate unknown waters one runs the risk of shipwreck.
--Albert Einstein

Design 1 Soldiers On Field At Daytime

Design 3 Man And Woman Kissing On Grass Field During Daytime

Design 5 Man And Woman Holding Each Others Hands

Design 13 Albert Einstein Quote: If One Tries To Navigate Unknown Waters One Runs The Risk Of Shipwreck.- Black Text On Quotes Background

Design 14 Albert Einstein Quote: If One Tries To Navigate Unknown Waters One Runs The Risk Of Shipwreck.- White Text On Starry Pic Background

Design 15 Albert Einstein Quote: If One Tries To Navigate Unknown Waters One Runs The Risk Of Shipwreck.Printed In White Text On Seashore Background

The universe works in mysterious ways and for me it worked out perfectly. With all respect to everybody else, Aaron Sorkin is and was The West Wing, full stop. There's no West Wing without him.

The universe works in crazy ways. Your good luck will come in waves, and so does your bad, so you have to take the good with the bad and press forward.

The universe will put signposts in your life. You can either ignore them or embrace them. You can choose and wish for all the things you want, but the things that are coming to you, you will never be able to hide from and the things that you want so bad that are not supposed to be for you for whatever reason, they'll never come to you.

The universe will pay you to be yourself and do what you really love.

The universe will never be extinguished because just when the darkness seems to have smothered all, to be truly transcendent, the new seeds of light are reborn in the very depths.

The universe will finally become a ball of radiation, becoming more and more rarified and passing into longer and longer wave-lengths. The longest waves of radiation are Hertzian waves of the kind used in broadcasting. About every 1500 million years this ball of radio waves will double in diameter; and it will go on expanding in geometrical progression for ever. Perhaps then I may describe the end of the physical world as-one stupendous broadcast.

The universe will always remove what is no longer serving you. 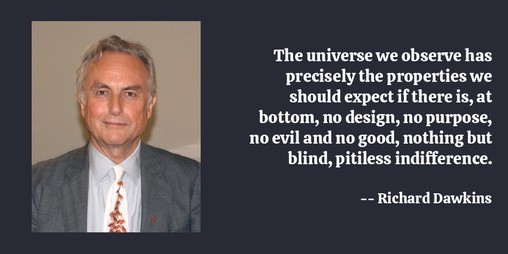 The universe we observe has precisely the properties we should expect if there is, at bottom, no design, no purpose, no evil and no good, nothing but blind, pitiless indifference.

The universe was exploding, each particle away from the next, hurtling us into dark and lonely space, eternally tearing us away from each other -- child out of the womb, friend away from friend, moving from each other, each through his own pathway towards the goal-box of solitary death.

The universe was created in the hopes of distilling a portion of genuine love -- Janjic.

The universe was a vast machine yesterday, it is a hologram today. Who knows what intellectual rattle we'll be shaking tomorrow.

The universe wants us to have fun doing more than one thing in life. That's how it learns. You don't have one purpose in life. You have maybe 500 or so.

The universe wanted you to celebrate and appreciate your life so every year she gave you a birthday.

The universe took its time on you
Crafted you to offer the world
Something different from everyone else
When you doubt
How you were created
You doubt an energy greater than us both
-- irreplaceable.

The universe that suckled us is a monster that does not care if we live or die -- it does not care if it itself grinds to a halt. It is a beast running on chance and death, careening from nowhere to nowhere. It is fixed and blind, a robot programmed to kill. We are free and seeing; we can only try to outwit it at every turn to save our lives.

The universe tends toward maximum irony. Don't push it.

The universe starts off with the Big Bang theory, and the first thing that emerged from the Big Bang is essentially hydrogen and then helium. And that's what combusts in stars. Finally, stars implode, and they build heavier elements out of that. And those heavier elements are reconstituted in the heart of other stars, eventually.

The universe sometimes breaks things without telling them why -- that is when the process of healing will hurt the most.

The universe seems to me infinitely strange and foreign. At such a moment I gaze upon it with a mixture of anguish and euphoria; separate from the universe, as though placed at a certain distance outside it; I look and I see pictures, creatures that move in a kind of timeless time and spaceless space, emitting sounds that are a kind of language I no longer understand or ever register.