The next world war will be fought with stones.
--Albert Einstein

Design 8 Body Of Water Under Cloudy Sky At Night

Design 13 Albert Einstein Quote: The Next World War Will Be Fought With Stones.- Black Text On Quotes Background

Design 14 Albert Einstein Quote: The Next World War Will Be Fought With Stones.- White Text On Starry Pic Background

Design 15 Albert Einstein Quote: The Next World War Will Be Fought With Stones.Printed In White Text On Seashore Background

The cocktail party is easily the worst invention since castor oil.

The cocktail party has a simple function in modern society. Its basic purpose is to pay off social debts.

The cocktail party -- as the name itself indicates -- was originally invented by dogs. They are simply bottom-sniffings raised to the rank of formal ceremonies.

The cocktail filled him with a whirling exhilaration behind which he was aware of devastating desires -- to rush places in fast motors, to kiss girls, to sing, to be witty.... He perceived that he had gifts of profligacy which had been neglected.

The cockroach and the bird were both here long before we were. Both could.

The cobs were delivered to a big pile. We were one of the first to feed corn cobs to cattle.

The coat of the buffalo never pinches under the arm, never puckers at the shoulders; it is always the same, yet never old fashioned nor out of date.

The coast redwood is a so-called relict species. It is a tiny remnant of a life form that once spread in splendor and power across the face of nature. The redwood has settled down in California to live near the sea, the way many retired people do.

The coast of British Columbia was one of the three chief centers of aboriginal America.

The coast is an edgy place. Living on the coast presents certain stark realities and a wild, rare beauty. Continent confronts ocean. Weather intensifies. It's a place of tide and tantrum; of flirtations among fresh- and saltwaters, forests and shores; of tense negotiations with an ocean that gives much but demands more. Every year the raw rim that is this coast gets hammered and reshaped like molten bronze. This place roils with power and a sometimes terrible beauty. The coast remains youthful, daring, uncertain about tomorrow. The guessing, the risk; in a way, we're all thrill seekers here.

The coarsest father gains a new impulse to labor from the moment of his baby's birth; he scarcely sees it when awake, and yet it is with him all the time. Every stroke he strikes is for his child. New social aims, new moral motives, come vaguely up to him.

The coarsening of our culture towards violent death has more consequences than war. Tragically, this same culture has led to the death of 50 million unborn children in the last 40 years. I don't think a civilization can long endure that does not have respect for all human life, born and not yet born. I believe there will come a time when we are all judged on whether or not we took a stand in defense of all life from the moment of conception until our last natural breath.

The coal mining industry is very destructive and it doesn't have to be.

The coal industry is an even larger part of the Australian economy than it is of the American, and it has an enormous amount of political power.

The coal industry is a huge industry when we're talking about polluting the environment, our air and our waterways.

The coal industry has helped fuel this Nation for 150 years, and coal can be used to heat our homes, power our economy, and protect our Nation for at least another 150 years if we continue to use it. 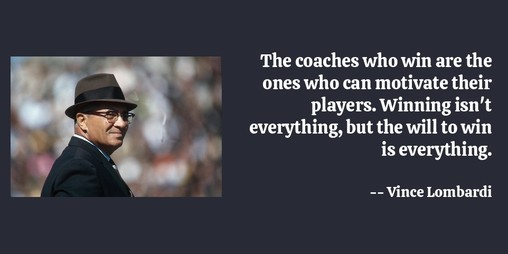 The coaches who win are the ones who can motivate their players. Winning isn't everything, but the will to win is everything.

The coaches are working with me every day. And if you feel like the coach is behind you, you'll take some chances.?