Your imagination is your preview of life's coming attractions.
--Albert Einstein

Design 15 Albert Einstein Quote: Your Imagination Is Your Preview Of Life's Coming Attractions.Printed In White Text On Seashore Background

When I did Seven Easy Pieces, I actually re-performed the performances of other artists. It was such difficult work because I had to really go through the documentation, look through the sources, to ask the witnesses who saw it.

When I did Sean Penn's movie, I think I was living in, like, a $500-a-month room, and someone called me up or bumped into me and asked me if I'd come up to work for a day. That sort of got me going a little bit. But it wasn't until Sin City 2005 that I kind of got back into the game.

When I did Inherit the Wind, I learned about teaching school. I also found out what a fundamentalist was.

When I did Comic Relief, I did it to be on the show; it's a badge of honor as a comedian to do that show.

When I did Ben 10, I really didn't know anything about Ben 10. But when I went back to visit my son Pierre and told him what I'd just done, he said You did a Ben 10?!? and then he started yelling out to my grandson, Luca, Luca, come here, Granddaddy did a Ben 10 show. You suddenly discover you're gratte-cul with a five-year-old, and that's pretty cool. 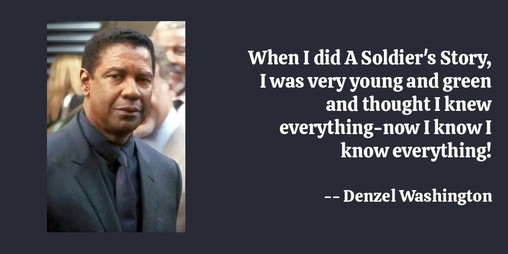 When I did A Soldier's Story, I was very young and green and thought I knew everything-now I know I know everything!

When I did 'Young Guns II,' I hung out with Emilio and Kiefer, and I once took a trip with Rob Lowe -- we jumped trains.

When I did 'Wichita Lineman,' it was as good as I could do it, so I keep doing it that way. It's such a haunting song.

When I did 'Unforgettable,' it wasn't appropriate for us to take liberties with that music. There had to be kind of a fine line between what had made it so great and the fact that a woman was singing it. We changed some of the arrangements, but not too much.

When I did 'Ugly Betty' it was very similar to working on 'Mad Men' -- great group of people in their own little world. But I don't really see a lot of difference. Of course, on the cable shows, you can tackle subjects and be more specific, because networks have to appeal to the masses, but that's constantly changing and evolving.

When I did 'Tokyo Drift,' a lot of the philosophy that Han lived by I have actually gone through in my own life. As I got older, I realized that I really believe in those philosophies, like the importance of family.