Man is here for the sake of other men -- above all for those upon whose smiles and well-being our own happiness depends.
--Albert Einstein

Design 1 Person Tip-Toeing In Front Of Other Person

Design 8 Bird In The Sky

Design 13 Albert Einstein Quote: Man Is Here For The Sake Of Other Men -- Above All For Those Upon Whose Smiles And Well-Being Our Own Happiness Depends.- Black Text On Quotes Background

Design 14 Albert Einstein Quote: Man Is Here For The Sake Of Other Men -- Above All For Those Upon Whose Smiles And Well-Being Our Own Happiness Depends.- White Text On Starry Pic Background

Design 15 Albert Einstein Quote: Man Is Here For The Sake Of Other Men -- Above All For Those Upon Whose Smiles And Well-Being Our Own Happiness Depends.Printed In White Text On Seashore Background

General relativity is in the old Newtonian framework where you predict what will happen, not the probability of what will happen. And putting together the probabilities of quantum mechanics with the certainty of general relativity, that's been the big challenge and that's why we have been excited about string theory, as it's one of the only approaches that can put it together.

General relativity is the cornerstone of cosmology and astrophysics. It has also provided the conceptual basis for string theory and other attempts to unify all the forces of nature in terms of geometrical structures.

General scepticism is the live mental attitude of refusing to conclude. It is a permanent torpor of the will, renewing itself in detail towards each successive thesis that offers, and you can no more kill it off by logic than you can kill off obstinacy or practical joking.

General statements omit what we really want to know. Example: some horses run faster than others.

General, unless he offers us honorable terms, come back and let us fight it out!

General, you don't have a war plan! All you have is a kind of horrible spasm!

General: I attempted to take Williamsport yesterday, but found too large a force of infantry and artillery. After a long fight, I withdrew to this place.

Generalised anger and frustration is something that gets you in the studio, and gets you to work -- though it's not necessarily evident in anything that's finished. 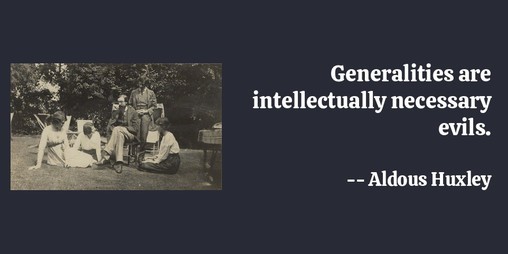 Generalities don't count and won't help you in football.

Generality is, indeed, an indispensable ingredient of reality; for mere individual existence or actuality without any regularity whatever is a nullity. Chaos is pure nothing.

Generalization is a natural human mental process, and many generalizations are true--in average. What often does promote evil behavior is the lazy, nasty habit of believing that generalizations have anything at all to do with individuals.

Generalization is necessary to the advancement of knowledge; but particularity is indispensable to the creations of the imagination.

Generalization is necessary to the advancement of knowledge; but particularly is indispensable to the creations of the imagination. In proportion as men know more and think more they look less at individuals and more at classes. They therefore make better theories and worse poems.