We owe a lot to the Indians, who taught us how to count, without which no worthwhile scientific discovery could have been made.
--Albert Einstein

Design 13 Albert Einstein Quote: We Owe A Lot To The Indians, Who Taught Us How To Count, Without Which No Worthwhile Scientific Discovery Could Have Been Made.- Black Text On Quotes Background

Design 14 Albert Einstein Quote: We Owe A Lot To The Indians, Who Taught Us How To Count, Without Which No Worthwhile Scientific Discovery Could Have Been Made.- White Text On Starry Pic Background

Design 15 Albert Einstein Quote: We Owe A Lot To The Indians, Who Taught Us How To Count, Without Which No Worthwhile Scientific Discovery Could Have Been Made.Printed In White Text On Seashore Background

I have, I think, eight mentors. It's crazy, but I need them. They are all really important to me. They keep me grounded and advise me.

I have, alas, only one illusion left, and that is the Archbishop of Canterbury.

I have, all the days of my life, enjoyed singing very much.

I have, as it were, my own sun and moon and stars, and a little world all to myself.

I have, as may be apparent, not much respect for editors as a class.

I have, as you know, the utmost respect for President Obama as a person. 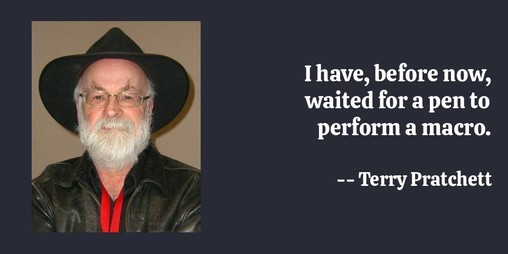 I have, before now, waited for a pen to perform a macro.

I have, by God's grace, learned as a member of the Christian community what is the nature of God's mercy, which does not leave me to overcome my sin by my own effort, so I have something to say to the fellow-sufferer who does not know where to look for hope. And what I have to say depends utterly on my willingness not to let go of that awareness of myself that reminds me where I start each day--not as a finished saint but as a needy person still struggling to grow.

I have, by long experience, found women to be like Telephus's spear: if one end kills, the other cures.

I have, by nature, an analytical mind.

I have, compartmentalized in my head, one file for the NFL, one for college basketball and one for golf. They contain everything I've ever read, watched and learned.

I have, despite all disillusionment, never, never allowed myself to feel like giving up. This is my message today; it is not worthy of a human being to give up.

I have, ever since the first day of my campaign, called for criminal justice reform.

I have, for a few years, been writing comedy prose -- short pieces for my blog -- because I found it to be a good way to write while I was on a TV show. It was different enough from my scripts that it felt like a break, but it still was comedy and very fun. I like to do comedy!

I have, for a very long time, been a huge admirer of Marilynne Robinson, whose work I just love.

I have, for many years past, contemplated the noble races of red men who are now spread over these trackless forests and boundless prairies, melting away at the approach of civilization.

I have, from the beginning, been opposed to Trump hiring any of his relatives. Americans don't like that; I don't like that. That's the one fascist thing he's done. Hiring his kids.

I have, from time to time, stopped using it for books, when they pissed me off about something -- the negotiation with Hachette, for instance. I thought that was outrageous bullying, and I discontinued using Amazon for books. I did use it for socks, but I didn't use it to buy books.