People tried to change my concept of what music is. That music is work, but it's not like that.


Everyone my age probably grew up listening to the 'perreos' of Plan B.


Some people are making music just for numbers and views.


To me, the most important artists in my career are Arcangel and Balvin. Arcangel gave me the push, the respect in the streets.


I have the space and liberty to create.


I always like to create things that get attention. It used to be a problem when I wasn't famous. Now, I can do whatever I want and people have to accept it.


I can dance to just about anything.


When I grow up, I want to be like Balvin.


Everyone has been in love, at some point or another.


Now I do whatever I want.


It's an honor for me to represent urban music, reggaeton, trap and hip-hop.


Trap is new. It didn't start yesterday, but when I was 5, it didn't exist -- not even in the U.S. I've evolved with the music.


To all the musicians who are making reggaeton, let's put some more effort into it and bring something new to the people!


If I have the chance to say something, I will say it -- but that doesn't obligate me to always say something, or to shed light on every problem, as if I were a lawmaker.


My mami and papi love my music. They're always listening to the radio waiting for one of my songs to come on. And when it does, they turn up the volume -- and turn it back down when it's over.


Education is important because it prepares you for life.


You learn a lot in life but there are a lot of tools and resources in school that help you grow professionally and personally for whatever goal you may want to achieve.


Being a Puerto Rican artist, I support all kinds of projects that are developed on my beautiful island that in some way or another put our Puerto Rican flag up.


Reggaeton is something else -- it is part of pop culture. It is something very big that I don't believe will ever die.


I made the track 'Si Tu Novio Te Deja Sola' before I met Balvin.


I like being comfortable at airports, in flip-flops with no jewelry on.


My style influences my music and everything around me.


The world can criticize me, but l can always criticize it back.


I'm not going to make a song just to make a song. The day that I make an album, it's so that people really know what Bad Bunny's about.


The fame isn't important to me. It's a blessing to have. Having so many people that support me, that love me and listen to my music, is beautiful.


I would get out of school and go straight to my computer to create beats.


Honestly, I always believed in myself. For real, for real.


When I arrived, at first a lot of people were like, 'This kid is different.'


When I was a little boy in school I had to dress up as a bunny and there's a picture of me with an annoyed face, and when I saw it, I thought I should name myself 'Bad Bunny.'


I only act from my heart.


To all the musicians, to the Academy, with all due respect, reggaeton is part of our Latin culture. And its representing as much as any other genre at the worldwide level.


Be proud to be Latino and never lose that pride!


Apple has given me a platform to spread music. They're giving us Latinos a chance to shine.


Obviously black matches with everything.


For years, decades, the system has taught us to stay quiet. They've made us believe that those who take to the streets to speak up are crazy, criminals, troublemakers.


I work hard to be able to set myself apart from everything else that's going on in the trap genre.


When I was at school, I used to stay on a balcony singing and people would stand around listening.


If a small-town boy like me who bagged groceries was able to make his dreams come true, you can too.


If I went out to play basketball with other kids, when I came home I'd shower and go right back to the computer again. If there was a birthday party or a family activity, I would take my laptop and spend the whole day there.


Puerto Rico's relationship with music is everything. It's an island full of talent and if you grow up there, you grow up living and breathing music.


Working with J Balvin has undoubtedly been an unparalleled experience.


My mom is very religious -- Catholic -- and from a young age they brought me to the church.


The only difference between Benito and Bad Bunny is 16 million followers on Instagram. And the money that Bad Bunny has in the bank. Benito had, like, $7. The numbers are different, but I'm still the same. Even my insecurities remain the same.


Fashion is one thing, but style is another.


Everyone has their style and your style explains a lot about who you are -- you feel me? I've had style since childhood, so I like to dress how I feel. But maybe I get carried away by some trends.

I've always been surrounded by many great people and professors, but my family, especially my mom who was a teacher, was the person who encouraged me to study and pushed me to continue. When we're young, we don't understand why our parents bug us so much with school and doing homework, but it's a blessing to have that support at home. 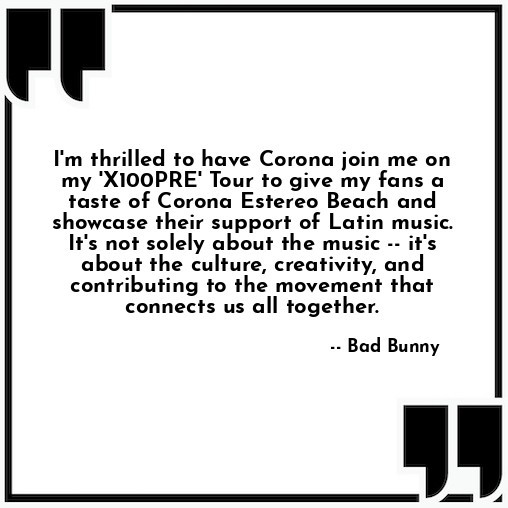 
I'm thrilled to have Corona join me on my 'X100PRE' Tour to give my fans a taste of Corona Estereo Beach and showcase their support of Latin music. It's not solely about the music -- it's about the culture, creativity, and contributing to the movement that connects us all together.


I don't travel with them, but they can't be missing in my home. There have to always be dominoes... I used to play with my family -- dad, my grandpa, my uncles.


I tried to give the world a bit of creativity, lyrics. And for me, I will always represent music from Puerto Rico, reggaeton, Latin music.