When it feels like we need to choose between being right and being humble- pick both.
--Bob Goff

Design 8 Bob Goff Quote: When It Feels Like We Need To Choose Between Being Right And Being Humble- Pick Both.- Black Text On Quotes Background

Design 9 Bob Goff Quote: When It Feels Like We Need To Choose Between Being Right And Being Humble- Pick Both.- White Text On Starry Pic Background

Design 10 Bob Goff Quote: When It Feels Like We Need To Choose Between Being Right And Being Humble- Pick Both.Printed In White Text On Seashore Background

Waves are not as dangerous as fear of waves.

Waves are inspiring not because they rise and fail, but because each time they fall. They never fail to rise again.

Wave particle duality is a core feature of our world. Or rather, we should say, it is a core feature of our mathematical descriptions of our world. But what is critical to note here is that, however ambiguous our images, the universe itself remains whole and is manifestly not fracturing into schizophrenic shards. It is this tantalizing wholeness and the thing itself that drives physicists onward like an eternally beckoning light that seems so teasingly near. It is always out of reach.

Wave after wave of trial rolled over us; but at the end of the year some of us were constrained to confess, that we had learned more of the loving-kindness of the Lord than in any previous year of our lives.

Wave after wave of love flooded the stage and washed over me, the beginning of the one great durable romance of my life.

Watteau is no less an artist for having painted a fascia board while Sainsbury's is no less effective a business for producing advertisements which entertain and educate instead of condescending and exploiting.

Watson, ... if I can get a mechanism which will make a current of electricity vary in its intensity, as the air varies in density when a sound is passing through it, I can telegraph any sound, even the sound of speech.

Watson is a cheap, efficient little sod of a literary device. Holmes doesn't need him to solve crimes any more than he needs a ten-stone ankle weight. The audience, Arthur. The audience needs Watson as an intermediary, so that Holmes's thoughts might be forever kept just out of reach. If you told stories from Holmes's perspective, everyone would know what the bleeding genius was thinking the whole time. They'd have the culprit fingered on page one.

Watson augments human decision-making because it isn't governed by human boundaries. It draws together all this information and forms hypotheses, millions of them, and then tests them with all the data it can find. It learns over time what data is reliable, and that's part of its learning process.

Waterworld was the best time of my life. It was physically demanding, but it was fun. I mean, you're in Hawaii for nine months shooting on the water every day.

Waters are distilled out of Herbs, Flowers, Fruits, and Roots.

Watermelon it's a good fruit. You eat, you drink, you wash your face.

Watermelon -- it's a good fruit. You eat, you drink, you wash your face. 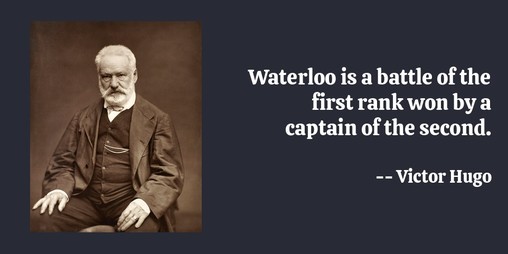 Waterloo is a battle of the first rank won by a captain of the second.

Watering places -- the sports of the field -- cards! never-failing cards! -- the assembly -- the theater -- all contribute their aid -- amusements are multiplied, and combined, and varied, 'to fill up the void of a listless and languid life;' and by the judicious use of these different resources, there is often a kind of sober settled plan of domestic dissipation, in which with all imaginable decency year after year wears away in unprofitable vacancy.

Watergate was unique because it allowed the public to play its democratic role in expressing its outrage at the presidency. And as a result, for the first time in history a president resigned.

Watergate was a constitutional crisis of the highest order.