Having a baby is like taking your lower lip and forcing it over your head.


I eat very well, and I do Pilates.


I didn't really get comfortable until I got to UCLA, and I had to take an acting course because I was studying theater arts.


When I was starting out in this business, that was the norm. You did it all. You looked around, and entertainers could dance, sing, play the piano, act, make you laugh.


Kristin Wiig I think is brilliant.


When I went to New York to try and make it, I never thought it wouldn't happen.


I'm so happy with what has happened in my life.


I loved doing 'The Family' with Eunice and Mama. They were very interesting because there were no jokes written into those sketches. It was all character-driven. And sometimes it got a little heavy.


I love to write. I have always loved writing. That was my first love.


I can't tell a joke to save my soul. It's just not my thing, though I love to listen to jokes.


I think the reason I was successful is that I was never cynical.


But I didn't ask to have somebody nose around in my private life. I didn't even ask to be famous. All I asked was to be able to earn a living making people laugh.


I am not a person who yells at all, but I realized that I have always felt so good after doing the Tarzan yell, after doing Charo, or screaming as Eunice.


Have you noticed that all you need to grow healthy, vigorous grass is a crack in your sidewalk? Having a baby is like taking your lower lip and forcing it over your head.


If someone tells you that you cannot do something and you believe it, they are right.


Because of YouTube, I'm getting fan mail from 10-year-olds and teenagers and college kids.


I always preferred working with somebody so I could look into their eyeballs and play tennis.


I always had a weak chin because we couldn't afford to correct my bite, which could have been corrected with braces. So the chin was always weak. And I always was -- kind of hated my profile. And I thought wouldn't it be nice someday to feel the rain on your chin without having to look up.


I had a good loud voice and I wasn't afraid to be goofy or zany.


I have always grown from my problems and challenges, from the things that don't work out, that's when I've really learned.


No one ever said life was fair. Just Eventful.


I struggled for a while, but when I was cast in an Off Broadway show called 'Once Upon a Mattress,' that kind of put me on the map.


I was very entertained by Betty Grable and Judy Garland.


My favourite comedian, of course, is Tim Conway. He has a way about him -- being that belly-laugh kind of funny, and he has the improvisational skills, too. I've never seen anybody better.


Jimmy Stewart and Lucille Ball were so unique.


I wanted to be on Broadway, but in musical comedy.

I was in California, and I was going to UCLA, and I knew I certainly didn't have movie star looks. I remember seeing pictures and photos of Ethel Merman and Mary Martin, who were kind of average looking. I said, 'Well, that's for me, then, to go back to New York and try to be in musical comedy on Broadway.'


In '57, I got a job at the Blue Angel nightclub, and a gentleman named Ken Welch wrote all my material for me. I lived at a place called the Rehearsal Club that was actually the basis for a play called Stage Door.


It's not a bad thing to be able to do many things onstage. If you're an entertainer, you should be able to entertain. I'm proud to say that I'm not a one-trick pony.


I don't watch sitcoms. I really don't. My problem with them is they take so long to film them that there's no spontaneity. I want to see that.


As far as sitcoms go, I thought Jenna Elfman in 'Dharma and Greg' was a wonderful physical comedienne who had great timing.


I love the writing. I love the idea of typing and seeing it on the computer and printing it out myself and, you know, moving sentences around. I like that.


I do think there are some great female comics: Tina Fey, Amy Poehler, Kristen Wiig, Maya Rudolph. They're the whole ball of wax.

When I was in college at UCLA, I took a playwriting course. I was all set to be a writer. But I had to take this acting class as a theater arts major. I had to do this scene in a one-act comedy. I just said this line, and then... this laugh happened. I thought, 'Whoa. This is a really good feeling. What have I been missing?'


When things are a disappointment, try not to be so discouraged.


Funny is funny. I dare anyone to look at Tim Conway and Harvey Korman doing the dentist sketch, which is more than 40 years old, and not scream with laughter.


My interesting diet tips are eat early and don't nosh between meals. I mean, I can pack it away.


If you want to know the feeling of labor pain, just take your bottom lip and pull it over your head.


I liked myself better when I wasn't me.


I don't eat much meat, fish, or poultry.


Originally, I came from Texas, and we lived on -- I guess you'd call it welfare, what we called relief.


I wish my mother had left me something about how she felt growing up. I wish my grandmother had done the same. I wanted my girls to know me.


I was once asked to do my Tarzan yell at Bergdorf Goodman, and a guard burst in with a gun! Now I only do it under controlled circumstances.

I'm glad I was born when I was. My time was the golden age of variety. If I were starting out again now, maybe things would happen for me, but it certainly would not be on a variety show with 28 musicians, 12 dancers, two major guest stars, 50 costumes a week by Bob Mackie. The networks just wouldn't spend the money today.


I'm really not that funny in real life! But I am the best audience one could find. I love to laugh.


I'm not always optimistic. You wouldn't have all cylinders cooking if you were always like Mary Poppins.


It's almost impossible to be funnier than the people in Washington.


I think the hardest thing to do in the world, show-business-wise, is write comedy.


You have to go through the falling down in order to learn to walk. It helps to know that you can survive it. That's an education in itself.


But I don't begrudge anybody, because I know how hard it is to have that dream and to make it happen, whether or not it's just to put a roof over your head and food on the table.


I don't have false teeth. Do you think I'd buy teeth like these?


Everybody I know who is funny, it's in them. You can teach timing, or some people are able to tell a joke, though I don't like to tell jokes. But I think you have to be born with a sense of humor and a sense of timing.


We don't stop going to school when we graduate. 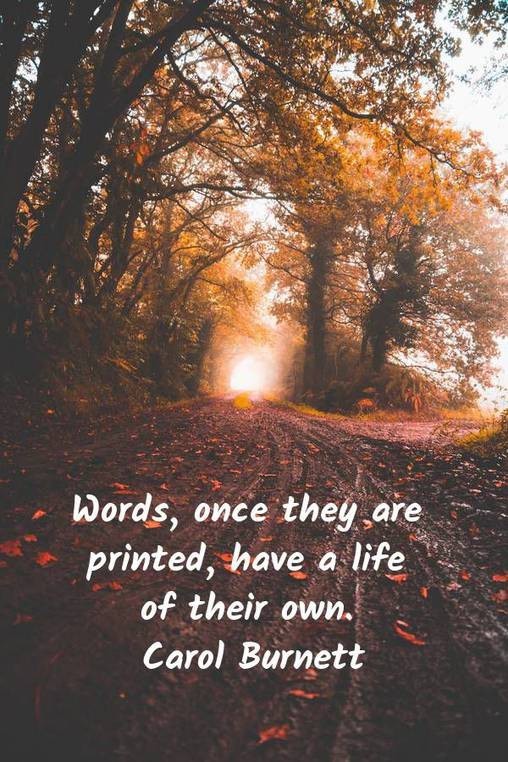 
Words, once they are printed, have a life of their own.


Because nobody goes through life without a scar.


My grandmother and I followed my mother here, to a house a block north of Hollywood Boulevard but a million miles away from Hollywood, if you know what I mean. We would hang out behind the ropes and look at the movie stars arriving at the premieres.


It's also selfish because it makes you feel good when you help others. I've been helped by acts of kindness from strangers. That's why we're here, after all, to help others.


My grandmother and I would go see movies, and we'd come back to the apartment -- we had a one-room apartment in Hollywood -- and I would kind of lock myself in this little dressing room area with a cracked mirror on the door and act out what I had just seen.


When you have a dream, you've got to grab it and never let go.

Quotes by Carol Burnett are featured in: