The world has done nothing to me that I haven't done with the world.


What kind of shorts I wear has nothing to do with music.


Everything I wrote about wasn't about me, but about the people listening.


I always want to play the songs that people want to hear.


I think my interviews were much better than what some of the writers wrote. I just wanted the truth out.


My 12th was my most Christian and most boring year of my life. Try as I did, day after day, to cling to righteousness, I was washed down in suds of sinful surroundings.


I should have been a son of Einstein.


One of my realizations is that if you revel over joy, you're going to ache over pain and get killed over hurt. Your span of feelings are going to go just as far one way as the other.


I wanted to be a comedian. And I did that so much in high school, I couldn't get a girlfriend.


There had to be a market in order for you to be successful in a business. The market had to need your business, or the product of it.


People said I was king, but I was never king, and I say I'm the prime minister.


I have lots of ambition!


Remember that my view, the only true view I can see with, is through the black eyes that I have.


I'm thankful for performing as long as I am allowed.


Music should be made to make people forget their problems, if only for a short while.


Elvis' songs will always be there, and I hope mine will be after I'm gone.


If you're going to be mad, at least let the people know what you're mad about.


I'm thankful for each and every day. We never know when time is up.


I don't want the bottom, so I have to sacrifice the top.


I just feel I got my inspiration, education and all from others that came before me. And I added my... I don't even know if I added anything. I played what they played, and it sounded different, I guess.


Rather than have joy, I would rather be absent of pain.


I added and deleted according to the audiences' response to different gestures, and chose songs to build an act that would constantly stimulate my audience.


It's not me to toot my horn. The minute you toot your horn, it seems like society will try and disconnect your battery. And if you do not toot your horn, they'll try their darnedest to give you a horn to toot, or say that you should have a horn.


If I wasn't a musician, I'd take up the law. They are the rottenest, wealthiest people in America.


I made records for people who would buy them. No color, no ethnic, no political -- I don't want that, never did.


I directed my music to the teen-agers. I was 30 years old when I did 'Maybellene.' My school days had long been over when I did 'School Day,' but I was thinking of them.


In the Fifties, there were certain places we couldn't ride on the bus, and now there is a possibility of a black man being in the White House. You have to feel good about it.


Maybe it is true what they say, that playing these Chuck Berry songs is easy. But try singing them. The words come out hard, like bullets.


People don't want to see 17 pieces in neckties. They wanna see some jeans, some gettin' down, and some wigglin'. 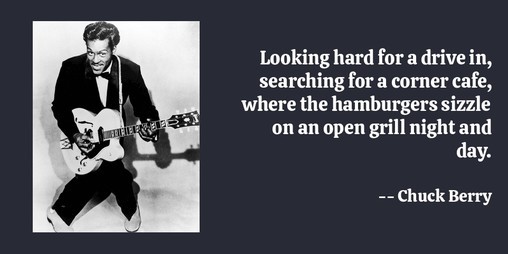 
Looking hard for a drive in, searching for a corner cafe, where the hamburgers sizzle on an open grill night and day.


It's gotta be rock and roll music, if you wanna dance with me.


Rock 'n' roll accepted me and paid me, even though I loved the big bands I went that way because I wanted a home of my own. I had a family. I had to raise them. Let's don't leave out the economics. No way.


All I want for Christmas is a rock n roll electric guitar.

The gateway to freedom...was somewhere close to New Orleans where most Africans were sorted through and sold. I had driven through New Orleans on tour and I'd been told my great grandfather had lived way back up in the woods among the evergreens in a log cabin. I revived the era with a song about a coloured boy named Johnny B. Goode. My first thought was to make his life follow as my own had come along, but I thought it would seem biased to white fans to say 'coloured boy' and changed it to 'country boy'.


The media dresses things up. There's a lot of inaccuracy.


Had I been pushed like Colonel Parker pushed Elvis, had I been a white boy like Elvis, sure, it would have been different.


My first job at Gleason's Bar in Cleveland was $800 a week, when I was making $92 a week with overtime at the automobile plant.


I wanted to play blues. But I wasn't blue enough. I wasn't like Muddy Waters, people who really had it hard. In our house, we had food on the table. We were doing well compared to many. So I concentrated on this fun and frolic, these novelties.


Music is an important part of our culture and record stores play a vital part in keeping the power of music alive.


Listening to Nat Cole prompted me to sing sentimental songs with distinct diction.


Respect isn't enough. You've got to have a proprietary interest.


I used to work at Kroger's. When the store opened, you were there. When I worked in an automobile plant, you punched in. So it showed if you were a minute late. If you have a paid job, you show up.


Music is music; you can't change rock and say well this is punk rock and this is acid rock or rockabilly.


The Man Upstairs is taking care of me.


Curiosity provoked me to lay a lot of our country stuff on our predominantly black audience and some of our black audience began whispering who is that black hillbilly at the Cosmo?


There has been a great laziness in my soul. Lots of days I could write songs, but I could also take my $400 and play the slot machines at the riverfront casino.


I eat meat daily. I'm not Jewish. I'm not Arabic. What's the kind of person that doesn't eat meat? That's right -- I'm not a vegetarian.


Could you imagine the way I felt, I couldn't unfasten her safety belt. All the way home I held a grudge, for the safety belt that wouldn't budge.

When I was a kid I used to scoot under the table, and whenever company would come around you know or my sisters or parents would tell me, go under the table and I'd do it because it was entertainment for the family or aunts or whatever. And one time at the Paramount when I first did it, you know, Brooklyn Paramount, I did it in the act during an instrumental and it got a big ovation and so I coined it as one of the things I should do in the act. And since I've been doing it.


Rock is my child and my grandfather.


If you want to release your aggression, get up and dance. That's what rock and roll is all about.


In a Toyota, the cops don't think about stopping you so much.

That's the misconceptions that people have, that Chuck Berry went to jail. They're just totally wrong. It might have said something in the large papers in the bigger city headlines and things. But, you take a look at any of the local papers, and you will see that I was acquitted. I never went to jail.


I love poetry. I love rhyming. Do you know, there are poets who don't rhyme? Shakespeare did not rhyme most of the time, and that's why I do not like him.


My music is simple stuff. Anybody can sit down, look at a set of symbols and produce sounds the music represents.


I would sing the blues if I had the blues.


In a way, I feel it might be ill-mannered to try and top myself. The music I play is a ritual. Something that matters to people in a special way. I wouldn't want to interfere with that.


The Big Band Era is my era. People say, 'Where did you get your style from?' I did the Big Band Era on guitar. That's the best way I could explain it.


Of the five most important things in life, health is first, education or knowledge is second, and wealth is third. I forget the other two.


My singing days have passed. My voice is gone. My throat is worn. And my lungs are going fast.


Charlie Christian played amplified guitar with Benny Goodman's quartet. He was the greatest guitar player that ever was. But he never looked up from the guitar. But I put a little dance to it. They appreciate seein' something along with hearin' something.


I grew up thinking art was pictures until I got into music and found I was an artist and didn't paint.


The music played most around St. Louis was country-western and swing. Curiosity provoked me to lay a lot of the country stuff on our predominantly black audience. After they laughed at me a few times, they began requesting the hillbilly stuff.


Science and religion are both the same thing. They're there; they're life. If it's not science, it's not a fact.


It amazes me when I hear people say, 'I want to go out and find out who I am.' I always knew who I was. I was going to be famous if it killed me.


That's all there was in our house: poetry and choir rehearsal and duets and so forth; I listened to Dad and Mother discuss things about poetry and delivery and voice and diction -- I don't think anyone could know how much it really means.


My dad was the cause of me being in show business. He was not only in poetry but in acting a bit. He was Mordecai in the play 'A Dream of Queen Esther.'


You don't just go to the studio and say, 'I'm going to write a hit.' It becomes a hit when people like your compositions.


Praise doesn't mean anything to me. I don't judge myself.


You know, your ears record. You might can sing a song once you hear it.


A song is a song. But there are some songs, ah, some songs are the greatest. The Beatles song 'Yesterday.' Listen to the lyrics.


Rock 'n' roll accepted me and paid me, even though I loved the big bands... I went that way because I wanted a home of my own. I had a family. I had to raise them. Let's don't leave out the economics. No way.


It's amazing how much you can learn if your intentions are truly earnest.


If the people in the audience are talking, you're being ignored. If the people are gazing at you, you've got something they want to hear.


Rock's so good to me. Rock is my child and my grandfather.