Design 2 Body Of Water Under Cloudy Sky At Night

Growing up gorilla is just like any other kind of growing up. You make mistakes. You play. You learn. You do it all over again.

Growing up here in Hawaii, I loved swimming, surfing, and having fun in this paradise we are lucky to call home. But I gradually realized that I was actually happiest when I was doing things for other people, doing things to protect our water, oceans, and beaches.

Growing up human is uniquely a matter of social relations rather than biology. What we learn from connections within the family takes the place of instincts that program the behavior of animals; which raises the question, how good are these connections?

Growing up in Africa, I always dreamt big.

Growing up in Alaska, they don't really teach you to swim there. I learned to swim just a few summers ago with Olympic gold medalist Amanda Beard. She did great, and right after that I went to get scuba certified. I had fun with it. I didn't really get scared, but some people thought that was a risk.

Growing up in America, I never really appreciated my culture. I knew what being Hispanic was, but I thought that since I didn't look Hispanic, I was white.

Growing up in Arizona, I love fireworks, shooting off bottle rockets and M80s.

Growing up in Asia in a particular time period -- the '50s and '60s -- I attended a Catholic missionary school where I was taught by nuns and where consciousness of the body was repressed. Yet at the same time, the female body was a highly visible and sensitive site.

Growing up in Atlanta I always had a sense of what fashion was, a sense of style -- my parents always talked about the importance of making a first impression and that's stayed with me.

Growing up in Atlanta, it brings a particular swagger about a person. There are three or four places in the country where people think of fashion: One is LA, obviously. Another is New York. And I think Atlanta has to be in the top five cities where fashion is very big.

Growing up in Augusta in such a protected and loving community is something that I really enjoy talking about. I love talking about -- even though I grew up, of course, in the time of segregated schools: Brown vs. Board of Education came along after I was already in first grade.

Growing up in Australia and the way I was raised, my dad told me to play as a team and to be a team player. You have five guys on the court. It's easy for five guys to defend one guy. It's hard to guard five. It's just a natural thing to do.

Growing up in Australia, space exploration wasn't something I was too aware of.

Growing up in Australia, we didn't really go on holiday. We lived beside the beach, so when I walked out of the back gate I was on the sand. 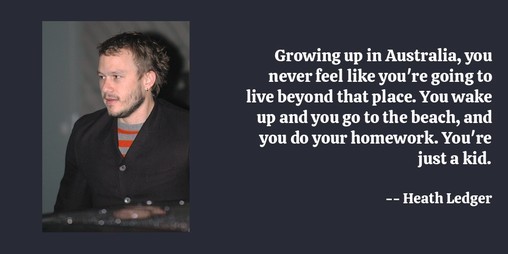 Growing up in Australia, you never feel like you're going to live beyond that place. You wake up and you go to the beach, and you do your homework. You're just a kid.

Growing up in Beirut, I used to go to the souks with my mother to buy fabrics... I understood fashion at an early age, and my first designs were when I was five.

Growing up in Bloomington, Minn., I loved the ritual of dressing for Little League -- in white socks, blue stirrups, belted pants, a double-knit jersey, and the cap I'd hold over my face to screen out mosquitoes in right field.

Growing up in Bombay, I saw many sick people.

All quotes by Clement Mok: