To be alive is to totally and openly participate in the simplicity and elegance of here and now.
--Don Altman

Design 8 Don Altman Quote: To Be Alive Is To Totally And Openly Participate In The Simplicity And Elegance Of Here And Now.- Black Text On Quotes Background

Design 9 Don Altman Quote: To Be Alive Is To Totally And Openly Participate In The Simplicity And Elegance Of Here And Now.- White Text On Starry Pic Background

Design 10 Don Altman Quote: To Be Alive Is To Totally And Openly Participate In The Simplicity And Elegance Of Here And Now.Printed In White Text On Seashore Background

Religion promotes the divine discontent within oneself, so that one tries to make oneself a better person and draw oneself closer to God.

Religion prescribes to every miserable man the means of bettering his condition; nay, it shows him that the bearing of his afflictions as he ought to do, will naturally end in the removal of them.

Religion poses a danger of creating division or intolerance between groups of people. However, the gospel of Jesus lead us to three things: humble service, reconciling behavior that is neither patronizing nor self-righteous, and a love toward people who hold different beliefs than we do.

Religion points to that area of human experience where in one way or another man comes upon mystery as a summons to pilgrimage.

Religion pervades intensely the whole frame of society, and is according to the temper of the mind which it inhabits, a passion, a persuasion, an excuse, a refuge; never a check.

Religion often partakes of the myth of progress that shields us from the terrors of an uncertain future.

Religion often is very embarrassing, and I totally get it. So I am sort of sometimes burdened with the fact that I love talking about it with anybody. Not just religious people.

Religion often is misused for purely power-political goals, including war.

Religion often gets credit for curing rascals when old age is the real medicine.

Religion of any form is a sacred matter. It involves the relation of the individual to some Being believed to be infinitely supreme. It involves not merely character and life here, but destiny hereafter, and as such is not to be spoken of lightly or flippantly.

Religion obviously played a role in this book and the previous book, too.

Religion mustn't interfere with the state -- so one of the basic Democratic principles as we know it in America is the separation of church and state.

Religion must mainly be a matter of principles only. It cannot be a matter of rules. The moment it degenerates into rules, it ceases to be a religion, as it kills responsibility which is an essence of the true religious act.

Religion must completely encircle the spirit of ethical man like his element, and this luminous chaos of divine thoughts and feelings is called enthusiasm.

Religion must be loved as a kind of country and nursing-mother. It was religion that nourished our virtues, that showed us heaven, that taught us to walk in the path of duty.

Religion must be life made true; and life is action, growth, development -- begun now and ending never. And a life made true cannot confine itself -- it must reach out and twine around every pulsing interest within reach of its uplifting tendrils. 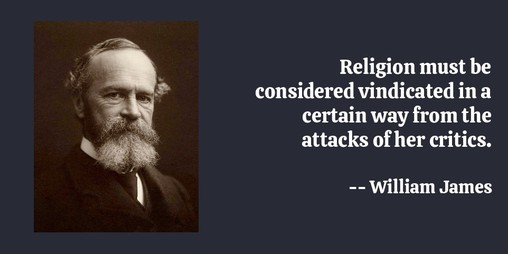 Religion must be considered vindicated in a certain way from the attacks of her critics.

Religion must be a punishment, because nobody gets religion who does not have a bad conscience.