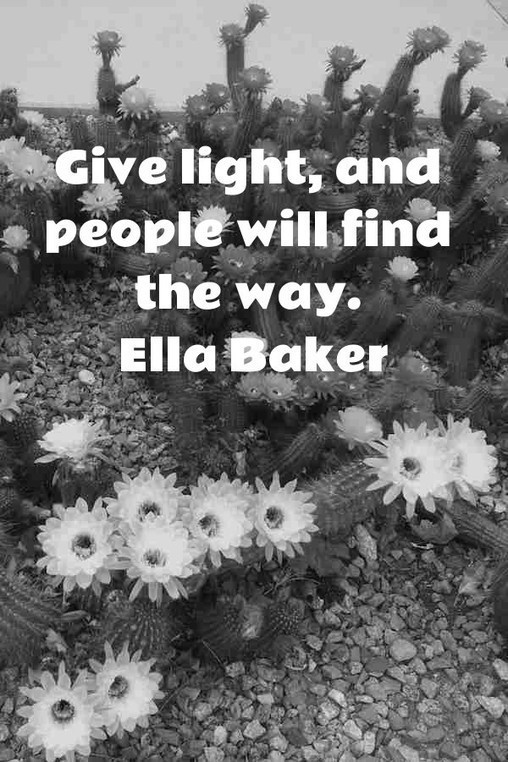 Give light, and people will find the way. 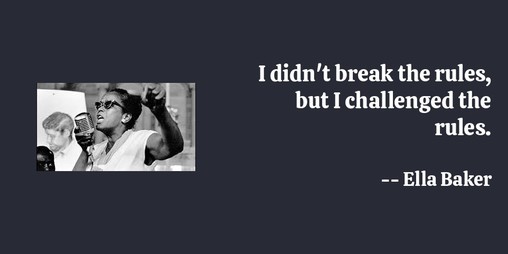 I didn't break the rules, but I challenged the rules. 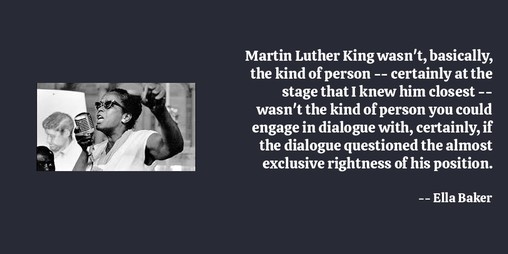 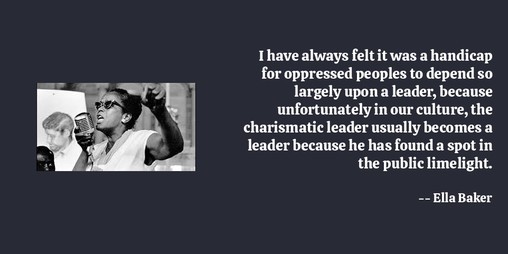 I have always felt it was a handicap for oppressed peoples to depend so largely upon a leader, because unfortunately in our culture, the charismatic leader usually becomes a leader because he has found a spot in the public limelight. 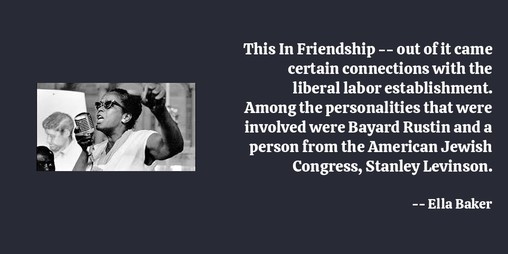 This In Friendship -- out of it came certain connections with the liberal labor establishment. Among the personalities that were involved were Bayard Rustin and a person from the American Jewish Congress, Stanley Levinson. 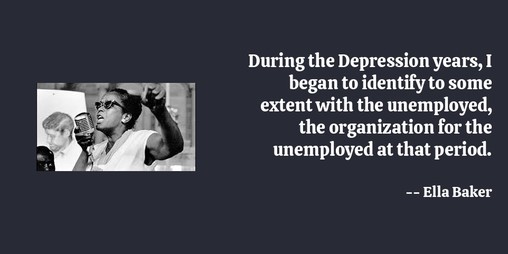 During the Depression years, I began to identify to some extent with the unemployed, the organization for the unemployed at that period. 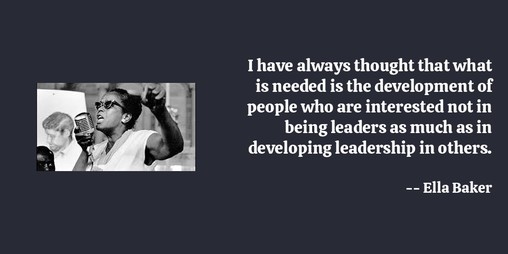 I have always thought that what is needed is the development of people who are interested not in being leaders as much as in developing leadership in others. 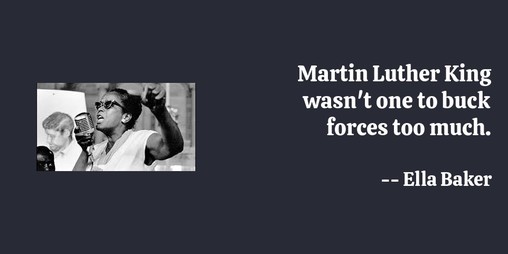 Martin Luther King wasn't one to buck forces too much. 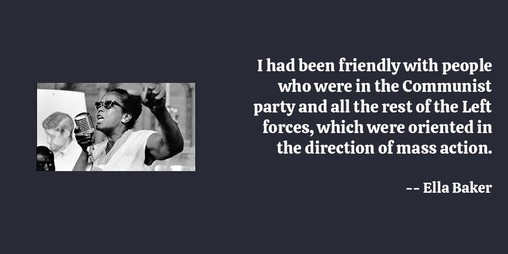 I had been friendly with people who were in the Communist party and all the rest of the Left forces, which were oriented in the direction of mass action. 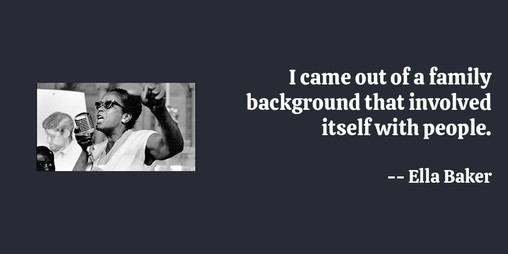 I came out of a family background that involved itself with people. 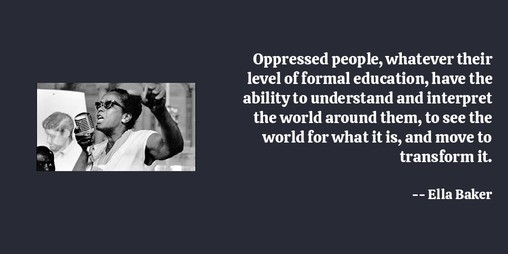 Oppressed people, whatever their level of formal education, have the ability to understand and interpret the world around them, to see the world for what it is, and move to transform it.

I began to feel that my greatest sense of success would raise the level of masses of people, rather than the individual being accepted by the Establishment. So, this kind of personal thinking, combined with, say, even the little bit more radical thinking -- because at one time the pacifist movement was a very radical concept. 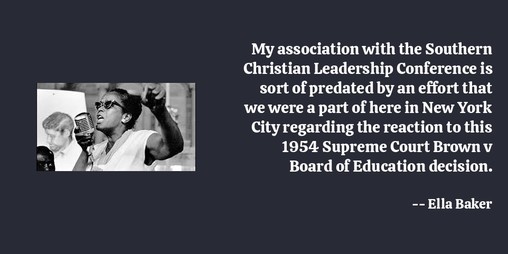 My association with the Southern Christian Leadership Conference is sort of predated by an effort that we were a part of here in New York City regarding the reaction to this 1954 Supreme Court Brown v Board of Education decision.

I suppose that the first organized effort that might be considered something of civil rights was the Young Negroes' Cooperative League. Now, this offers certain contradictions at this point, perhaps, because it was stimulated by the writings of George Schayler who, at this point, is considered an arch-conservative, I understand.

In '32 we organized the Young Negroes' Cooperative League and had some degree of success in terms of establishing stores and certainly buying clubs in various sections of the country. I was designated as -- I don't know what exactly -- I believe it was director. I'm not sure what it was, but it had to do with getting out the necessary mail and all of that -- organization. 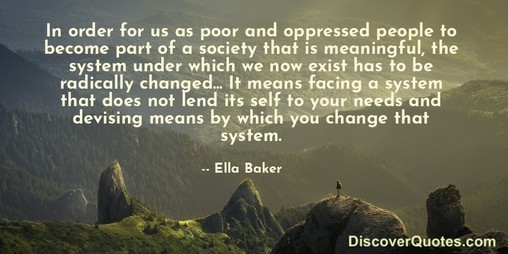 In order for us as poor and oppressed people to become part of a society that is meaningful, the system under which we now exist has to be radically changed... It means facing a system that does not lend its self to your needs and devising means by which you change that system.

After the '57 initial meeting -- I was up this way working, not as a staff person -- there became the need for a much more definite organized office. What you'd had prior to that time were these big meetings in different places, and there was nobody to pull anything together. Everything was left to Martin Luther King and the group that was around him. 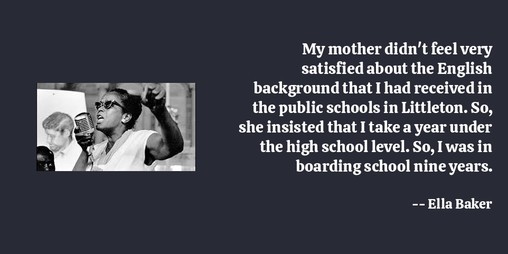 My mother didn't feel very satisfied about the English background that I had received in the public schools in Littleton. So, she insisted that I take a year under the high school level. So, I was in boarding school nine years. 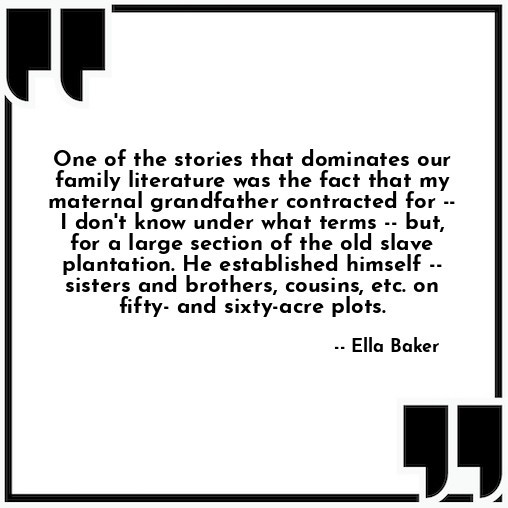 One of the stories that dominates our family literature was the fact that my maternal grandfather contracted for -- I don't know under what terms -- but, for a large section of the old slave plantation. He established himself -- sisters and brothers, cousins, etc. on fifty- and sixty-acre plots.

I had known, number one, that there would never be any role for me in the leadership capacity with SCLC. Why? First, I'm a woman. Also, I'm not a minister. And second, I am a person that feels that I have to maintain some degree of personal integrity and be my own barometer of what is important and what is not. 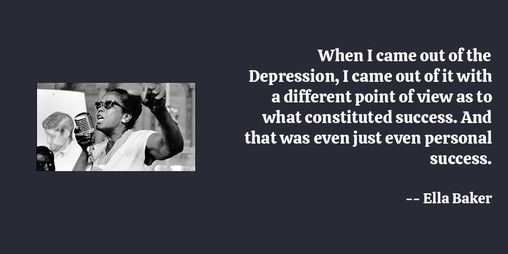 When I came out of the Depression, I came out of it with a different point of view as to what constituted success. And that was even just even personal success. 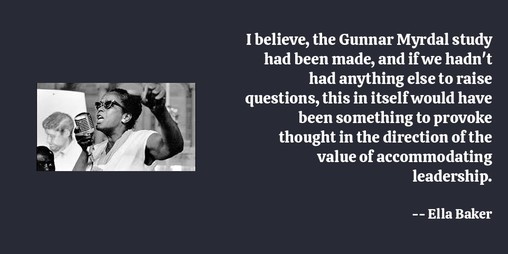 I believe, the Gunnar Myrdal study had been made, and if we hadn't had anything else to raise questions, this in itself would have been something to provoke thought in the direction of the value of accommodating leadership.

I think the reasons for not selecting persons like the Reverend Borders and John Wesley Dobbs were, in my book rather obvious reasons: because they were people who were basically oriented in the direction of the established method of not confronting the power structure, but trying to elicit concessions by various and sundry means of, well, let's call it accommodating leadership. 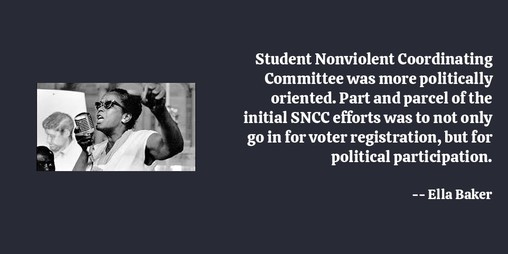 Student Nonviolent Coordinating Committee was more politically oriented. Part and parcel of the initial SNCC efforts was to not only go in for voter registration, but for political participation.

I, perhaps, at that stage, had the kind of ambition that others may have had; you know, namely based on the concept that if you were trained the world was out there waiting for you to provide a certain kind of leadership and give you an opportunity. But with the Depression, I began to see that there were certain social forces over which the individual had very little control.

From the Cooperative League, I suppose, with the Depression lingering as long as it did, the next step in terms of, as you call it, professional relationship, was to go to the National Association for the Advancement of Colored People NAACP. I went there as an assistant field secretary, and so forth. So, I suppose that was the first organized step. 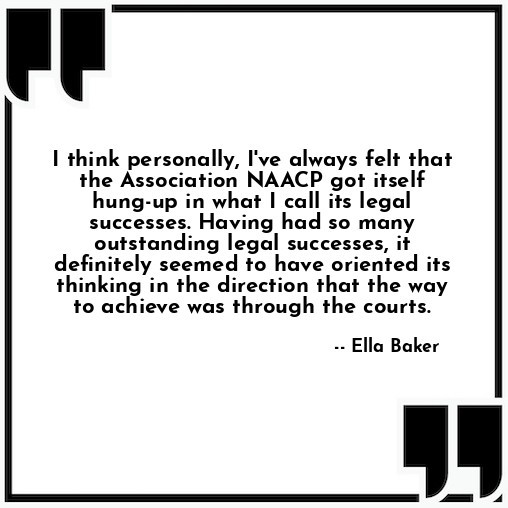 I think personally, I've always felt that the Association NAACP got itself hung-up in what I call its legal successes. Having had so many outstanding legal successes, it definitely seemed to have oriented its thinking in the direction that the way to achieve was through the courts.

I don't think that the leadership of Montgomery was prepared to capitalize, let's put it, on the projection that had come out of the Montgomery situation. Certainly, they had not reached the point of developing an organizational format for the expansion of it. So discussions emanated, to a large extent, from up this way.

The anniversary of the Montgomery boycott was being celebrated, and the handbill that was out, and all whatever literature that was circulated, didn't say practically anything about movement or what the movement stood for, what it had done, or anything, but was simply adulation of the leader, you know, Martin Luther King. 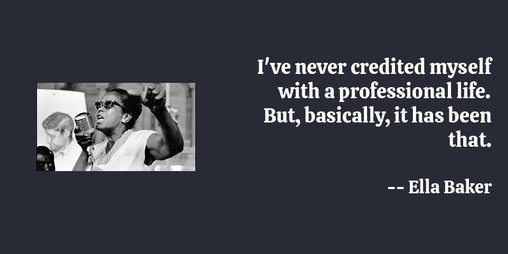 I've never credited myself with a professional life. But, basically, it has been that. 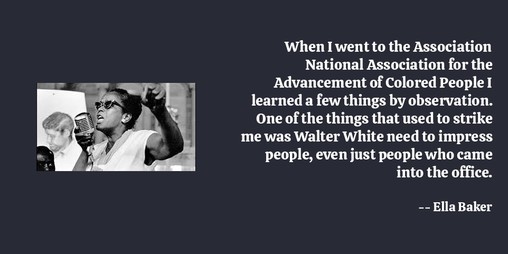 When I went to the Association National Association for the Advancement of Colored People I learned a few things by observation. One of the things that used to strike me was Walter White need to impress people, even just people who came into the office. 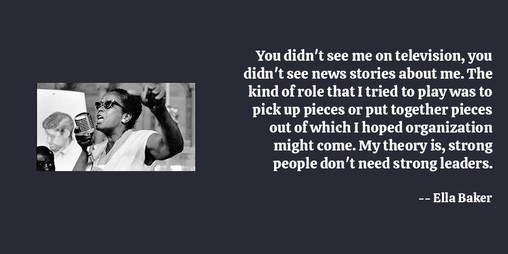 You didn't see me on television, you didn't see news stories about me. The kind of role that I tried to play was to pick up pieces or put together pieces out of which I hoped organization might come. My theory is, strong people don't need strong leaders. 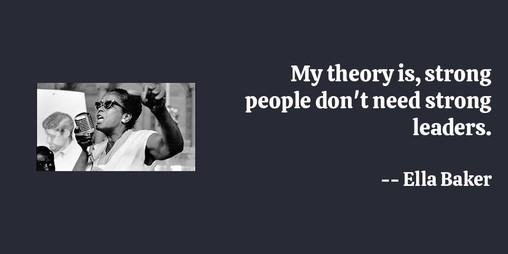 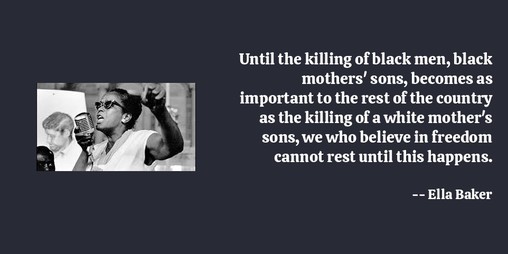 Until the killing of black men, black mothers' sons, becomes as important to the rest of the country as the killing of a white mother's sons, we who believe in freedom cannot rest until this happens. 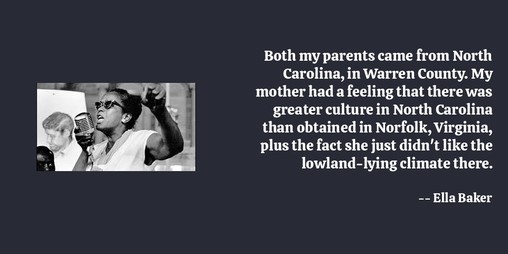 Both my parents came from North Carolina, in Warren County. My mother had a feeling that there was greater culture in North Carolina than obtained in Norfolk, Virginia, plus the fact she just didn't like the lowland-lying climate there. 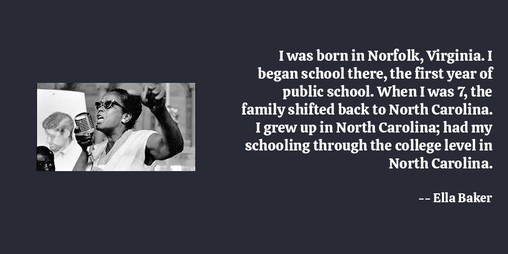 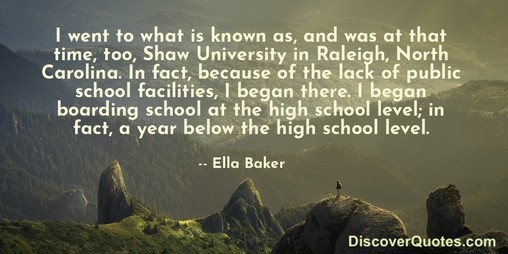 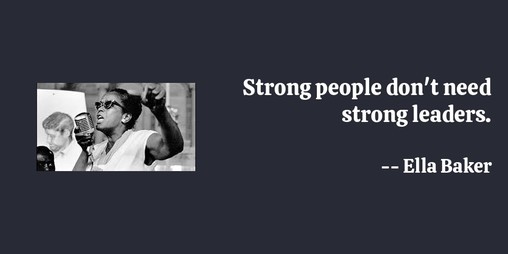 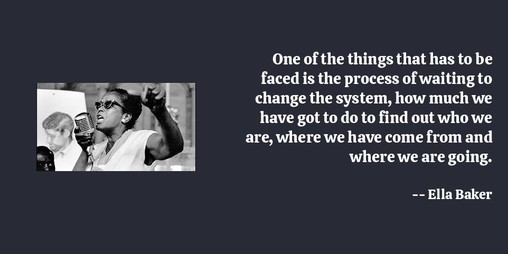 One of the things that has to be faced is the process of waiting to change the system, how much we have got to do to find out who we are, where we have come from and where we are going.

Quotes by Ella Baker are featured in: