And into the forest I go, to lose my mind and find my soul.
--John Muir

Design 4 Close Up Photo Of Tree

Design 18 John Muir Quote: And Into The Forest I Go, To Lose My Mind And Find My Soul.- White Text On Starry Pic Background

Design 19 John Muir Quote: And Into The Forest I Go, To Lose My Mind And Find My Soul.Printed In White Text On Seashore Background

We're at the crossroads, where we need to win to stay alive.

We're at the crossroads, ... where we need to win to stay alive.

We're at the beginning of the digitization and automation of biotech.

We're at risk of losing this iconic species for all time. Once it's stripped of its natural instincts, it's no longer a tiger. But there's a lot of species like that. The more intriguing thing, throughout Asia, a lot of these countries are selling off their jungle-and-forest rights for oil and for paper-and-pulp companies.

We're at maybe 1% of what is possible. Despite the faster change, we're still moving slow relative to the opportunities we have. I think a lot of that is because of the negativity... Every story I read is Google vs someone else. That's boring. We should be focusing on building the things that don't exist.

We're at a time when we are being presented with undeniable changes in the global climate and fundamental issues that affect every single one of us, and it's the time we're listening to the most hokey shite on the radio and watching vacuous bullshit celebrities being vacuous bullshit celebrities and desperately trying to forget about everything. Which is fine, you know, but personally speaking, I can't do that.

We're at a time now where there's a lot more I'll do whatever it takes attitude. I'm not going to say or do what you want me to say or do just because it might help me or be the politically correct thing to do to help my career. And that may have hurt me sometimes. I think about different collaborations that have been brought my way -- it might have meant I'd get to be on TV to do certain things, but I've said, No. It doesn't make sense. I'm not doing it. And other people might jump at the opportunity.

We're at a point right now in our development in this country -- setting the immigration issue aside -- that you can't ignore the sheer population of us in metropolitan areas all across the country, of how significant Latino-ness is in the United States.

We're at a point now where we've built AI tools to detect when terrorists are trying to spread content, and 99 percent of the terrorist content that we take down, our systems flag before any human sees them or flags them for us.

We're at a point in history where everyone needs to pay attention to politics. Too much is at stake for us to be apathetic.

All quotes by John Muir: 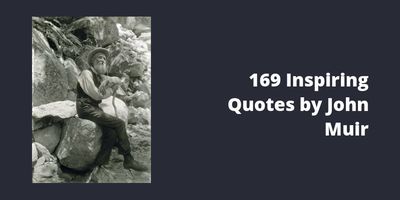