Simplicity, carried to an an extreme, becomes elegance.
--Jon Franklin 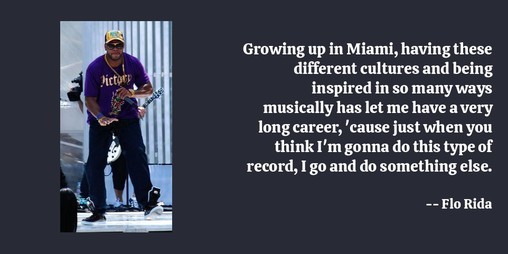 Growing up in Miami, having these different cultures and being inspired in so many ways musically has let me have a very long career, 'cause just when you think I'm gonna do this type of record, I go and do something else.

Growing up in Michigan, I can't think of anything so explicitly communicated to me in my whole education experience as the vileness of in-your-face racism.

Growing up in Minnesota, I had a lot of freedom to run around, and we had go-carts and four-wheelers and all that stuff. I like that adrenalin-rush stuff. I did a little bit of dance, but mostly sports.

Growing up in Mississippi -- a state that historically was a place of racial injustice, inequality and oppression -- gave me the unique opportunity to experience first-hand the evolution of the civil rights movement through the eyes of my parents, grandparents, and the black elders of our community.

Growing up in Mississippi, the first song that I ever remember hearing, that captivated my mind and transported me from my bedroom out to the West, is a song called 'Don't Take Your Guns to Town' by Johnny Cash. That's when I was 5-years-old. And I played that song over and over again. I pantomimed it in school for show-and-tell.

Growing up in Nashville, especially in a music business family, means growing up with knowledge that seems like common sense until later in life when you realize people spend thousands of dollars a semester trying to learn or pretending to learn while looking for some intern job on music row.

Growing up in New Jersey, bat mitzvas were all about the elegant parties.

Growing up in New Jersey, everyone wanted to be a tough guy. That meant baggy pants that fell down, big T- shirts, and chains. I couldn't imagine wearing tight jeans, as I thought it was dorky. Now I look at pictures of me then and think, 'Yeah, you looked dorky.'

Growing up in New Jersey, teen clubs were your life. I'm not kidding! That was it. I was literally tied up five days a week with teen clubs; my parents would drop me off. Like, I didn't even drive.

Growing up in New Orleans and just being in a poverty-stricken neighborhood gave me that same fire that Eazy had to separate himself from what could have ended up being such a bad situation.

Growing up in New Orleans as Archie Manning's son, I felt like a target, and I've always known that whatever I'd do, people would hear about it. So I've had my guard up, and maybe that's molded my personality.

Growing up in New Orleans helped me live a real life. I experienced so many things.

Growing up in New Orleans, I was always the only black kid, or one of two, on the school soccer team. While I was always conscious of this status, what took precedent was my unfettered love of the game.

Growing up in New York City and hip-hop are two inseparable things, two things that are totally intertwined in our lives.

Growing up in New York City, I was always encouraged to question authority, and I think I confused patriotism with jingoism.

Growing up in New York City, I'd flirted with the idea of driving, but between the subway and the sidewalks, I'd never needed to learn.

Growing up in New York City, my car culture is minimal. I rode on the train, the bus. I walked; I rode my bike, and when I was younger, I rode my skateboard.

Growing up in New York has influenced my style so much, and I have an amazing relationship with my stylist, Estee Stanley. We have so much fun with the whole process. She picks out dresses, I try things on and play dress up, and we get creative to see what works.