Choose only one master -- Nature.
--Rembrandt

Design 6 Body Of Water Near Mountains

Design 9 Man And Woman With Dog On Woods

Design 13 Gray Road Beside A Trees

George Washington sets the nation on its democratic path. Abraham Lincoln preserves it. Franklin Roosevelt sees the nation through depression and war.

George Washington understood that the Bible is the place where God's records of right and wrong are kept.

George Wendt is a saint. And one of the finest American actors that we have.

George Winston piano albums have been my go-to since junior high.

George and I talked. An hour passed. Surely we both had things to do.
There was a silence.
Nervously.
'Please, may I play the part?'
George paused.
Then quietly,
'Shurr.'
Not even a word. Hardly a syllable. A sound. A small sound above the London traffic.
It changed my life.

George feels that, even if all this double talk hasn't brought them any closer to understanding each other, the not-understanding, the readiness to remain at cross-purposes, is in itself a kind of intimacy.

George got out his banjo after supper, and wanted to play it, but Harris objected: he said he had got a headache, and did not feel strong enough to stand it. George thought the music might do him good -- said music often soothed the nerves and took away a headache; and he twanged two or three notes, just to show Harris what it was like.

Harris said he would rather have the headache.

George grinned. 'A pity you're perfectly dreadful at shooting.'
Aubrey shrugged. 'I've had all the lessons. I'm adequate.'
'Adequate? I suppose it depends on what you mean. If you mean that you haven't actually shot yourself by accident, then by all means describe yourself as adequate.'
George laced his fingers together and placed them on his chest. ''I'll come, then I might be able to spare you some embarrassment.'
'I'm honoured.

George has only got to ring me. His imagination is so wonderful, I'd do any character he might create. 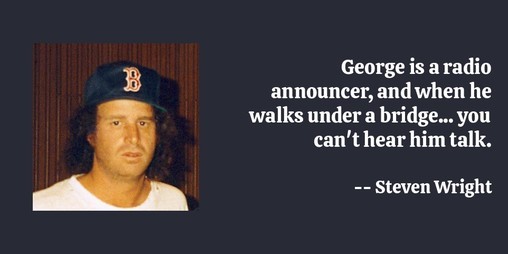 George is a radio announcer, and when he walks under a bridge... you can't hear him talk.

George is the best little dishwasher in Texas.

George loves the T Rex because it's the noisiest and the scariest.

George of the Jungle is a cartoon. He's a guy who swings around on a vine all day. Are you not buying that?

George paid for college by working for Cutco. Cutco is a company that makes and sells knives. Their salespeople go door-to-door. George Pinkman talked his way into peoples' homes with a big bag of knives and sold them potential murder weapons. Do I have to add that he was their top salesman three years running? I do not.

George said:
You know we are on the wrong track altogether. We must not think of things we could do with, but only of the things that we can't do without. (Chapter III).

George smiles to himself, with entire self-satisfaction. Yes, I am crazy, he thinks. That is my secret; my strength.

George was getting alot of independence for himself in those days. He was writing more, and wanted things to go his way -- where, when we first started things basically went John and Paul's way. You know, 'cuz they were the writers.

All quotes by Rembrandt: