What would it be like if, right in the midst of this busyness, we were to consciously take our hands off the controls? What if we were to intentionally stop our mental computations and our rushing around and, for a minute or two, simply pause and notice our inner experience?

What would it be like if I could accept life -- accept this moment -- exactly as it is?

What would he do? He wouldn't be sitting here moping.
He'd be figuring out some way of getting out of here. Christ,
I'm woefully short on practical experience. The researcher's
doom, actual field conditions.

What would have made seeing Göbekli Tepe from Harran easier, in antiquity, would have been a tall tower annexed to the temple that once stood here -- a temple dedicated to Su-En (usually contracted to Sin), the Moon God of the Sabians. After telling us that there were powerful images in this temple, the Greek Philosopher Libanius (AD 314-394), describes the tower, noting that from its top one could overlook the entire plain of Harran.
...
A team from the Chicago Oriental Institute was about to start a major dig around the ruins of the Grand Mosque in 1986, but it seems that the Turkish authorities insisted on such restrictive practices that the project had to be abandoned. Current excavations by Harran University and the Sanliurfa Museum Directorate show little interest in recovery of substantive remains from the city's pre-Islamic period.

What would happen, they conjectured, if they simply went on assuming their children would do everything. Perhaps not quickly. Perhaps not by the book. But what if they simply erased those growth and development charts, with their precise, constricting points and curves? What if they kept their expectations but erased the time line? What harm could it do? Why not try?

What would happen to a body that was starved, suffocated and then forced to drink poison? It would first suffer and then die an agonizing death. We willingly starve and suffocate our hearts by turning away form the remembrance of God. And then we poison our hearts through the bad company we keep, the garbage that goes into our eyes and ears, and emanates from our tongue...
And then we wonder why our heart feels dead.

What would happen in the U.S. to terrorists who are not citizens? In less than 24 hours, they would be rounded up, taken to the airport and expelled.

What would happen if you melted? You know, you never really hear this talked about much, but spontaneous combustion? It exists!... people burn from within... sometimes they'll be in a wooden chair and the chair won't burn, but there'll be nothing left of the person. Except sometimes his teeth. Or the heart. No one speaks about this, but its for real.

What would happen if you gave yourself permission to do something
you've never done before? There's only one way to find out.

What would happen if we finally succeeded in following the directions of nature and recognized that the great secret of education lies hidden in the maxim, 'Do not educate'?

What would happen if the autism gene was eliminated from the gene pool? You would have a bunch of people standing around in a cave, chatting and socializing and not getting anything done. 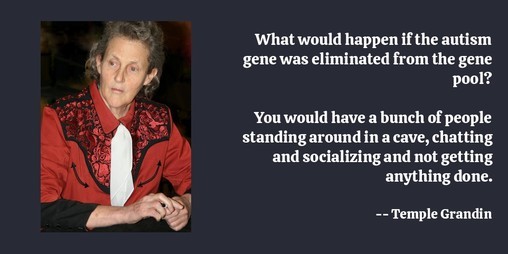 What would happen if the autism gene was eliminated from the gene pool?

You would have a bunch of people standing around in a cave, chatting and socializing and not getting anything done.

What would happen if our clothes were Internet-enabled? Can you imagine if you lost a sock? You could send out a search, and sock No. 3117 would respond that it's under the couch in the living room.

What would happen if one woman told the truth about her life?
The world would split open.

What would happen if history could be rewritten as casually as erasing a blackboard? Our past would be like the shifting sands at the seashore, constantly blown this way or that by the slightest breeze. History would be constantly changing every time someone spun the dial of a time machine and blundered his or her way into the past. History, as we know it, would be impossible. It would cease to exist.

What would happen if an angel appeared before the American president and told him there was no more need for war? Everything would collapse.

What would dawn have been like, had you awakened? It would have sung through your bones. All I can do this morning is let it sing through mine.