Nature is not our enemy, to be raped and conquered. Nature is ourselves, to be cherished and explored.
--Terence McKenna

Nature is not our enemy, to be raped and conquered. Nature is ourselves, to be cherished and explored. Shamanism has always known this, and shamanism has always, in its most authentic expressions, taught that the path required allies. These allies are the hallucinogenic plants and the mysterious teaching entities, luminous and transcendental, that reside in that nearby dimension of ecstatic beauty and understanding that we have denied until it is now nearly too late. -- Terence McKenna

Design 8 Body Of Water Surrounded With Plants Under Cloudy Sky

Design 18 Terence Mckenna Quote: Nature Is Not Our Enemy, To Be Raped And Conquered. Nature Is Ourselves, To Be Cherished And Explored.- Black Text On Quotes Background

Design 19 Terence Mckenna Quote: Nature Is Not Our Enemy, To Be Raped And Conquered. Nature Is Ourselves, To Be Cherished And Explored.- White Text On Starry Pic Background

Design 20 Terence Mckenna Quote: Nature Is Not Our Enemy, To Be Raped And Conquered. Nature Is Ourselves, To Be Cherished And Explored.Printed In White Text On Seashore Background

Germany's fascinating. It's a really rich landscape to film and dramatise.

Germany's fate is decided first and foremost in Europe. Reconciliation and cooperation in Europe have brought us freedom, peace and prosperity. Who would have dared to believe so much 50 years ago?

Germany's hierarchical reverence for seniority may have something to do with the fact that everything here happens relatively late. Germans start school at six, graduate in their late 20s, and get their first proper jobs in their 30s. Adolescence can go on a long time. It is rare for anyone to achieve responsibility before their 50s.

Germany's strength lies largely in the fact that the Federal Republic is a center of industry and that it's an export nation.

Germany, I think, was first to substitute a Social Security program for its elderly based on this premise, that is, that we would tax workers to pay retirement benefits for those retired.

Germany, Italy and France appear to possess less dynamism than do the U.S. and the others.

Germany, Japan and, to a lesser extent, Britain and Italy, were lifted out of the debris of war by the Americans who poured in billions of dollars and forgave other billions in debts.

Germany, because of the fact and the perception of a special relationship with Russia, is the only one who can influence Russian debate. Russians also believe that Germans understand them best because they've been through a big war and know what humiliation means.

Germination embraces in its complexity the explosion of a meteor and the breaking of the eggshell by the peck of the swallow's beak, and is equally responsible for the birth of an earthworm and the coming of Socrates. Where the telescope ends, the microscope begins. Which of the two has the greater vision? You choose. A patch of mould is a constellation of flowers. A nebula is an ant's nest of stars.

Gerry Dow -- he's like a fourth member. He lives in Sweden; his art work is more important than... it's just as important as the music and the stage show.

Gerry Ford is easy to spot on the course. He drives the cart with the red cross painted on top.

Gerry Mulligan and Chet Baker seemed so sophisticated and bad. I wanted to be like that.

Gerry Schoenfeld told me 'Les Parents Terribles' was not going to sell, even though we had Kathleen Turner and Jude Law in the cast. So we called it 'Indiscretions.'

Gerry?' Laurel had to strain to hear thought the noise on the other end of the line. 'Gerry? Where are you?'

'It would appear so. Unless this is the Tardis, in which case I'm in serious trouble.

Gerry?' Laurel had to strain to hear thought the noise on the other end of the line. 'Gerry? Where are you?' 'London. A phone booth on Fleet Street.' 'The city still has working phone booths?' 'It would appear so. Unless this is the Tardis, in which case I'm in serious trouble.

Gershwin inspired me very much. The concept of 'That Lucky Old Sun' was inspired by 'Rhapsody in Blue' -- not influenced, but inspired.

Gershwin's melodic gift was phenomenal. His songs contain the essence of New York in the 1920s and have deservedly become classics of their kind, part of the 20th-century folk-song tradition in the sense that they are popular music which has been spread by oral tradition (for many must have sung a Gershwin song without having any idea who wrote it).

All quotes by Terence McKenna: 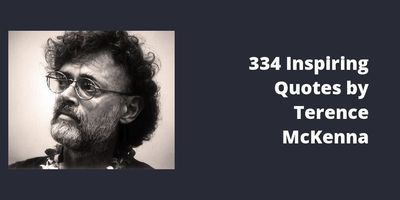