My mother was my biggest role model. She taught me to hate waste. We never wasted anything.

Profit in business comes from repeat customers, customers that boast about your project or service, and that bring friends with them.


Transformation is not automatic. It must be learned; it must be led.


Understanding variation is the key to success in quality and business.


'Quality' means what will sell and do a customer some good -- at least try to.


I am forever learning and changing.


Knowledge is theory. We should be thankful if action of management is based on theory. Knowledge has temporal spread. Information is not knowledge. The world is drowning in information but is slow in acquisition of knowledge. There is no substitute for knowledge.


The most important things we need to manage can't be measured.


A committee appointed by the President of a company will report what the President wishes to hear. Would they dare report otherwise?.


The customer is the most important part of the production line.


Without data, you're just another person with an opinion.


The individual has been crushed by our style of management today.


We cannot rely on mass inspection to improve quality, though there are times when 100 percent inspection is necessary. As Harold S. Dodge said many years ago, 'You cannot inspect quality into a product.' The quality is there or it isn't by the time it's inspected.


Export anything to a friendly country except American management.


Manage the cause, not the result.


Eighty percent of American managers cannot answer with any measure of confidence these seemingly simple questions: What is my job? What in it really counts? How well am I doing?


The principles and methods for improvement are the same for service as for manufacturing. The actual application differs, of course, from one product to another, and from one type of service to another.


A goal without a method is nonsense.


When a worker has reached a stable state, further training will not help him.


You do not find knowledge in a dictionary, only information.


Improve constantly and forever the system of production and service, to improve quality and productivity, and thus constantly decrease costs.


The big problems are where people don't realise they have one in the first place.


Does the customer invent new product or service? The customer generates nothing. No customer asked for electric lights. There was gas and gas mantles, which gave good light.


In Japan, a company worker's position is secure. He is retrained for another job if his present job is eliminated by productivity improvement.


The aim of education should be to preserve and nurture the yearning for learning that a child is born with.


A person and an organization must have goals, take actions to achieve those goals, gather evidence of achievement, study and reflect on the data and from that take actions again. Thus, they are in a continuous feedback spiral toward continuous improvement. This is what 'Kaizan' means.


Monetary rewards are not a substitute for intrinsic motivation.


Judging people does not help them. 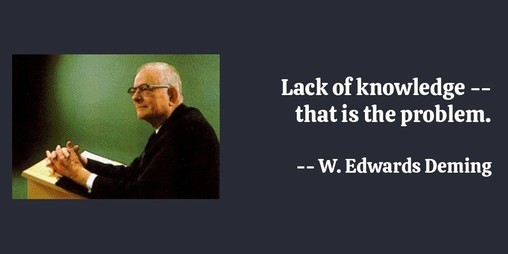 
Lack of knowledge -- that is the problem.


The biggest cost of poor quality is when your customer buys it from someone else because they didn't like yours.


The system that people work in and the interaction with people may account for 90 or 95 percent of performance.


You can only elevate individual performance by elevating that of the entire system.


Whenever there is fear, you will get wrong figures.


When asked what single event was most helpful in developing the Theory of Relativity, Albert Einstein replied, Figuring out how to think about the problem.


It is not enough that top management commit themselves for life to quality and productivity. They must know what it is that they are committed to -- that is, what they must do. These obligations cannot be delegated. Support is not enough; action is required.


The worker is not the problem. The problem is at the top! Management!


Adopt a new philosophy of cooperation (win-win) in which everybody wins.

Eliminate slogans, exhortations, and targets for the work force asking for zero defects and new levels of productivity. Such exhortations only create adversarial relationships, as the bulk of the causes of low quality and low productivity belong to the system and thus lie beyond the power of the work force.


Failure of management to plan for the future and to foresee problems has brought about waste of manpower, of materials, of the machine-time, of all which raise the manufacturer's cost and price that the purchaser must pay.


In God we trust; all others bring data.


Survival is optional.  No one has to change.


One cannot be successful on visible figures alone ... the most important figures that one needs for management are unknown or unknowable, but successful management must nevertheless take account of them.

Scientific data are not taken for museum purposes; they are taken as a basis for doing something. If nothing is to be done with the data, then there is no use in collecting any. The ultimate purpose of taking data is to provide a basis for action or a recommendation for action. The step intermediate between the collection of data and the action is prediction.


I should estimate that in my experience most troubles and most possibilities for improvement add up to the proportions something like this: 94% belongs to the system responsibility of management 6% special.


No one can measure the loss of business that may arise from a defective item that goes out to a customer.


Cease dependence on inspection to achieve quality. Eliminate the need for inspection on a mass basis by building quality into the product in the first place.


Quality is made in the board room. A worker can deliver lower quality, but she cannot deliver quality better than the system allows.


Management by results -- like driving a car by looking in rear view mirror.


The only useful function of a statistician is to make predictions, and thus to provide a basis for action.


Anybody can achieve gains in quality by slowing down production. That is not what we are talking about.


New product and new types of service are generated, not by asking the consumer, but by knowledge, imagination, innovation, risk, trial and error on the part of the producer, backed by enough capital to develop the product or service and to stay in business during the learn months of introduction.


The aim proposed here for any organization is for everybody to gain -- stockholders, employees, suppliers, customers, community, the environment -- over the long term.


Let us ask our suppliers to come and help us to solve our problems.


Everyone is a customer for somebody, or a supplier to somebody.


A system must be managed. It will not manage itself. Left to themselves in the Western world, components become selfish, competitive. We cannot afford the destructive effect of competition.

The aim of leadership should be to improve the performance of man and machine, to improve quality, to increase output, and simultaneously to bring pride of workmanship to people. Put in a negative way, the aim of leadership is not merely to find and record failures of men, but to remove the causes of failure: to help people to do a better job with less effort.

Part of America's industrial problems is the aim of its corporate managers. Most American executives think they are in the business to make money, rather than products or service. The Japanese corporate credo, on the other hand, is that a company should become the world's most efficient provider of whatever product and service it offers. Once it becomes the world leader and continues to offer good products, profits follow.


We are being ruined by the best efforts of people who are doing the wrong thing.


Divide responsibility and nobody is responsible.


We are here to learn, to make a difference and to have fun.


Innovation comes from people who take joy in their work.


Mere allocation of huge sums of money for quality will not bring quality.


The job can't be finished only improved to please the customer.


Quality begins with the intent, which is fixed by management.

Foremost is the principle that the purpose of consumer research is to understand the customer's needs and wishes, and thus design product and service that will provide better living for him in the future. A second principle is that no one can guess the future loss of business from a dissatisfied customer.


The most valuable currency of any organization is the initiative and creativity of its members. Every leader has the solemn moral responsibility to develop these to the maximum in all his people. This is the leader's highest priority. 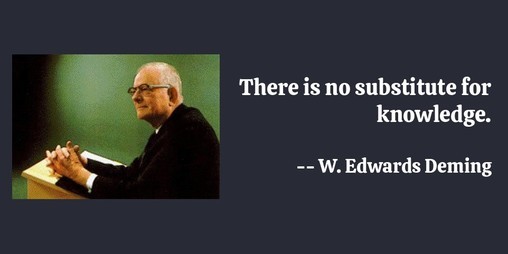 
There is no substitute for knowledge.


Any manager can do well in an expanding market.


If you do not know how to ask the right question, you discover nothing.


The emphasis should be on why we do a job.


The average American worker has fifty interruptions a day, of which seventy percent have nothing to do with work.


In 1945, the world was in a shambles. American companies had no competition. So nobody really thought much about quality. Why should they? The world bought everything America produced. It was a prescription for disaster.


American management thinks that they can just copy from Japan. But they don't know what to copy.


If you don't understand how to run an efficient operation, new machinery will just give you new problems of operation and maintenance. The sure way to increase productivity is to better administrate man and machine.


When a system is stable, telling the worker about mistakes is only tampering.


A bad system will beat a good person every time.


What should be the aim of management? What is their job? Quality is the responsibility of the top people. Its origin is in the boardroom. They are the ones who decide.


Research shows that the climate of an organization influences an individual's contribution far more than the individual himself.


It is not necessary to change. Survival is not mandatory.


The prevailing -- and foolish -- attitude is that a good manager can be a good manager anywhere, with no special knowledge of the production process he's managing. A man with a financial background may know nothing about manufacturing shoes or cars, but he's put in charge anyway.


People with targets and jobs dependent upon meeting them will probably meet the targets -- even if they have to destroy the enterprise to do it.


Quality is pride of workmanship.


I predicted in 1950 that in five years, manufacturers the world over would be screaming for protection. It took only four years.


If you can't describe what you are doing as a process, you don't know what you're doing.

Quotes by W. Edwards Deming are featured in: