Simplicity is the glory of expression.
--Walt Whitman

Design 6 Orange And Yellow Round Light

Design 9 Walt Whitman Quote: Simplicity Is The Glory Of Expression.Printed In White Text On Seashore Background

Fairest of the deathless gods.

This idea the Greeks had of him is best summed up not by a poet, but by a philosopher, Plato: Love--Eros--makes his home in men's hearts, but not in every heart, for where there is hardness he departs. His greatest glory is that he cannot do wrong nor allow it; force never comes near him. For all men serve of him their own free will. And he whom Love touches not walks in darkness.

Fairfax was incredibly important to the shaping of the country.

Fairies have to be one thing or the other, because being so small they unfortunately have room for one feeling only at a time.

Fairies in Ireland are sometimes as big as we are, sometimes bigger, and sometimes, as I have been told, about three feet high.

Fairies, arouse! Mix with your song Harplet and pipe, Thrilling and clear, Swarm on the boughs! Chant in a throng! Morning is ripe, Waiting to hear.

Fairly apolitical. Kind of aspiring to participate in life. I'm 18-19 years old. Wanting to dive into the world and finding the world opening for me in ways that were unimaginable. I didn't sleep for the whole first year at university because it was too much going on. Too many films to see, too many concerts to go to.

Fairly cheap home computing was what changed my life.

Fairly early in my career, I had a passion for wine just as a consumer, and I started to learn about the whole process, starting with a piece of raw ground, and ending up with a work of art in a bottle.

Fairly large print is a real antidote to stiff reading.

Fairly tales are myths, and myths are only myths because there's a grain of truth in them.

Fairness dictates that the highest income people should pay the greatest share of taxes, and they do.

Fairness does not consist so much of everybody's doing the same thing, but of everybody's being willing to do something that others don't want to do.

Fairness does not require the redistribution of wealth;

it requires the creation of wealth, geared to an economy

that can provide employment for everyone able and willing to work.

Fairness doesn't govern life and death. If it did, no good man would ever die young.

Fairness forces you -- even when you're writing a piece highly critical of, say, genetically modified food, as I have done -- to make sure you represent the other side as extensively and as accurately as you possibly can.

Fairness is a term that is interpreted different ways. For the government, fair is whatever suits their needs.

Fairness is actually not having presumptive negativity written about you and always assuming the worst about you.

Fairness is an across-the-board requirement for all our interactions with each other ...Fairness treats everbody the same.

Fairness is dealt out fairly.

All quotes by Walt Whitman: 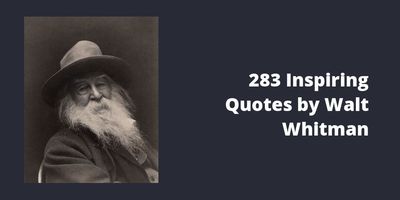