No one has a life where everything that happened was good. I think the thing that made life good for me is that I never looked back. I've always been positive, no matter what happened.


I was six years old before I realized that there was something wrong with me... But I did have this crooked left leg, and my left foot was turned inward.


I'm in my prime. There's no goal too far, no mountain too high.

After the scarlet fever and the whooping cough, I remember I started to get mad about it all... I went through the stage of asking myself, 'Wilma, what is this existence all about? Is it about being sick all the time? It can't be.' So I started getting angry about things, fighting back in a new way with a vengeance.


I thought I'd never get to see that. Florence Griffith Joyner -- every time she ran, I ran.


'I can't' are two words that have never been in my vocabulary. I believe in me more than anything in this world.


I had a series of childhood illnesses... scarlet fever.... pneumonia.... Polio. I walked with braces until I was at least nine years old. My life wasn't like the average person who grew up and decided to enter the world of sports.


I have spent a lifetime trying to share what it has meant to be a woman first in the world of sports so that other young women have a chance to reach their dreams. 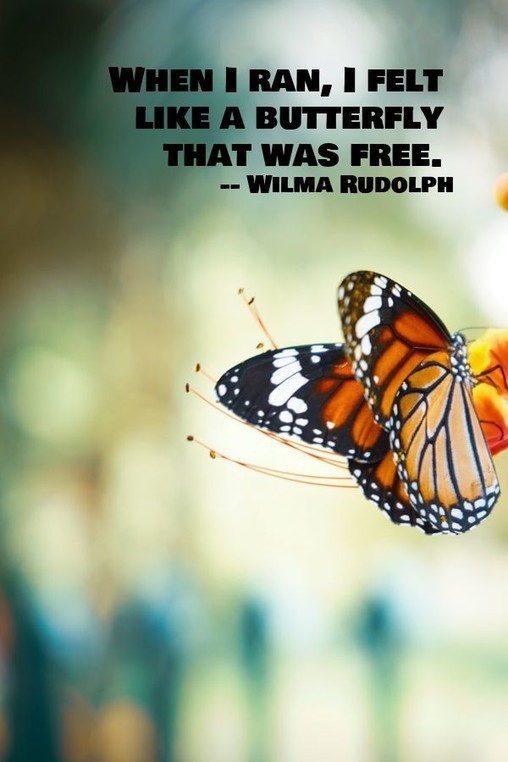 
When I ran, I felt like a butterfly that was free.


When I was going through my transition of being famous, I tried to ask God, why was I here? What was my purpose? Surely, it wasn't just to win three gold medals. There has to be more to this life than that.


The potential for greatness lives within us all.


What do you do after you are world-famous and nineteen or twenty and you have sat with prime ministers, kings and queens, the Pope? Do you go back home and take a job? What do you do to keep your sanity? You come back to the real world.


You become world famous, and you sit with kings and queens, and then your first job is just a job. You can't go back to living the way you did before because you've been taken out of one setting and shown the other. That becomes a struggle and makes you struggle.

I know black women in Tennessee who have worked all their lives, from the time they were twelve years old to the day they died. These women don't listen to the women's liberation rhetoric because they know that it's nothing but a bunch of white women who had certain life-styles and who want to change those life-styles.


It doesn't matter what you're trying to accomplish. It's all a matter of discipline. I was determined to discover what life held for me beyond the inner-city streets.


Believe me, the reward is not so great without the struggle.


I believe in me more than anything in this world.


The triumph can't be had without the struggle.


I loved the feeling of freedom in running, the fresh air, the feeling that the only person I'm competing with is me.


The feeling of accomplishment welled up inside of me, three Olympic gold medals. I knew that was something nobody could ever take away from me, ever.

Quotes by Wilma Rudolph are featured in: